*This post was sponsored by American Greetings, as part of their Give Meaning Campaign. The Give Meaning campaign reminds us that people and relationships are important, and how cards can help us express our feelings, especially when we don’t know exactly what to say. I chose to share our story on infertility in hopes of touching others that may be going through it, and to remember that something as simple as a card can mean a lot more than we think. 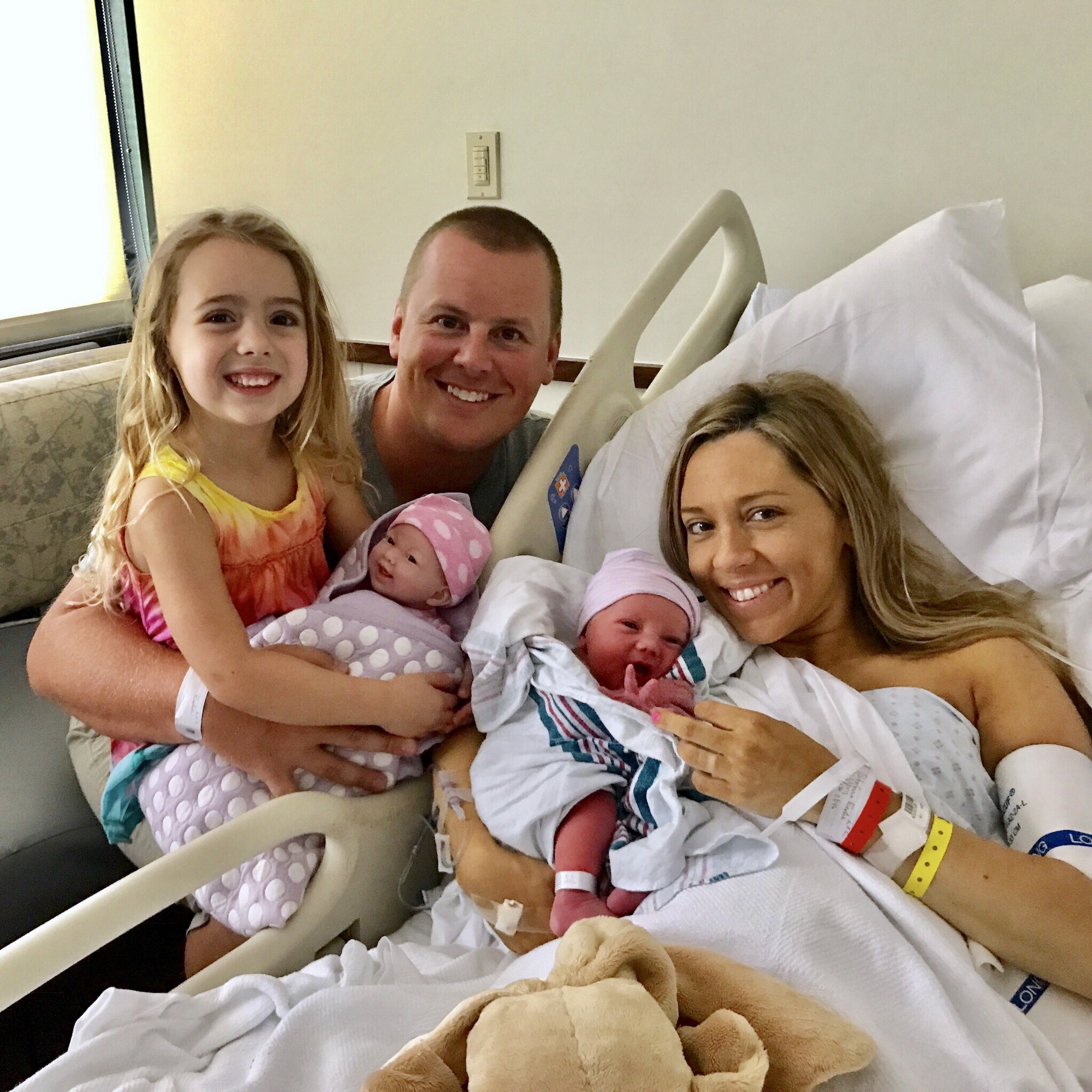 If I had a dollar for every time Blaire asked us when she was going to become a big sister, I think we could have had all our fertility treatments paid for! I’ve been wanting to share our story with you for awhile now, and was inspired to do so by the American Greetings Give Meaning Campaign.

If you “like” According to Blaire on Facebook, (if not – I’d love you for it! you can do so here) then you may have seen a post a couple weeks ago that I shared from American Greetings & Love What Matters of a video of a couple struggling to get pregnant. If you happened to watch it, you probably shed a tear! If you happened to watch and have struggled with infertility, then you may have shed A LOT of tears like I did. I’ll tell you why I shed those tears and what those tears meant to me.

(If you missed it you can see the video here.) 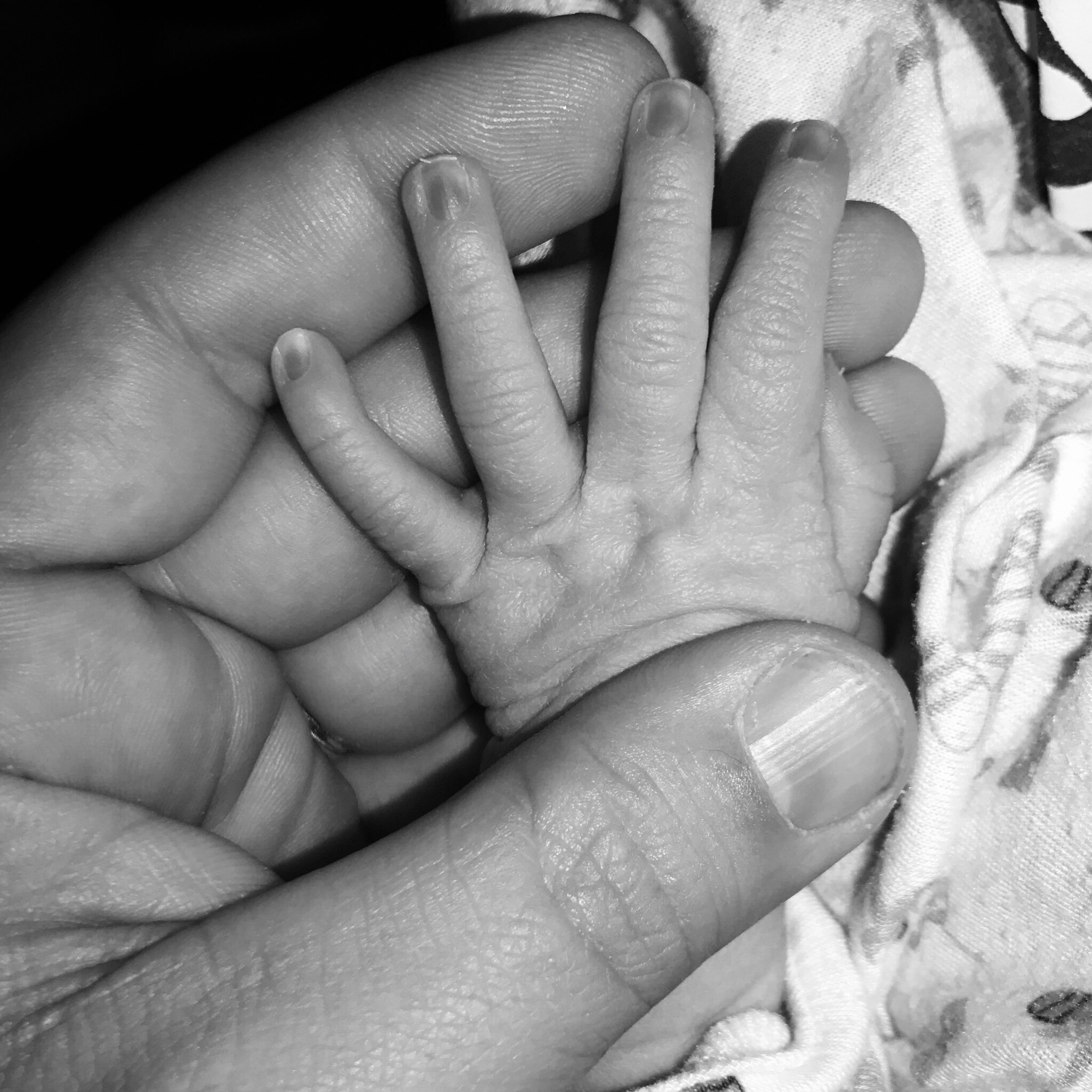 Those tears, so many tears over the last 3 years. You all know Blaire, our crazy, outgoing, fashionable, and HAPPY 4 year old that this very blog was named after. Before I had her, and even awhile after, I had no idea what the terms TTC, TWW, or BFN meant. But after a few months of ‘TTC’ (trying to conceive) with Brooklyn, I quickly learned more of those terms than I ever cared to know.

Infertility is definitely one of those things that you don’t truly understand until you’ve been through it. For us, I actually ended up seeing three different fertility specialists before getting pregnant with Brooklyn. I was pushed off by my first OBGYN several times, saying “stop trying, it will happen” or “you’re still so young” and not to worry. Even at the dermatologist when I had to write my current medications on the form, the doctor saw what drugs I was taking and told me I was way too young to be taking fertility drugs. Thanks so much for your input, but I don’t want to hear it.

After seeing my first fertility specialist for a few months, we weren’t sure of the problem was. However, after running lots of tests including an HSG procedure (a not-so-fun outpatient radiology test where dye is inserted into your cervix, that runs up through your fallopian tubes to ensure the path is clear for the sperm to meet the egg), I finally got pregnant. At that point, it was probably 10 or so months of trying to conceive, and I was so relieved to be done with those medications and trying to figure out what was wrong. Unfortunately, the excitement was short-lived and my positive pregnancy tests slowly faded away, blood-work results came back as a BFN (big, fat, negative) and I was informed by the nursing staff to expect a heavy period any day now. I still remember my EDD (estimated due date) of January 31st.

As depressing as that was, and trust me, I didn’t stop crying for three days straight, it made me remember something. I had a follow up appointment with the doctor and brought in these old papers that were handed down to me from Jason’s side of the family. Some members of his family, including himself, are carriers of a Balanced Translocation, meaning that material from two chromosomes have broken off and replaced each other- basically just rearranging the order of genetic material. It’s not really a big deal, as all of the information is still there. Since we had zero trouble getting pregnant with Blaire, it was hard for me to think that this was a factor getting pregnant another time.

After I spoke with my doctor about Jason being a carrier, there was no doubt in his mind that that was why we weren’t getting pregnant. I had passed all the tests with flying colors, and on paper my stats were double and triple what was considered great. I thought since we had found the problem, we could now find a solution, but it wasn’t that easy. Intrauterine Insemination (IUI) or  In Vitro Fertilization IVF were our proactive options.

We decided that IUI’s were what we were comfortable with and started along that path. After three failed IUI’s, we were discouraged and disappointed, and I sought out another specialist who would maybe have other ideas. I saw this new specialist who had some creative ideas, but after one cycle with him, we decided he just wasn’t the doctor for us. I was referred to my 3rd specialist, who happened to specialize in genetics, and after meeting with him we knew that he was the perfect doctor for us. My favorite characteristic about this doctor was that he was hopeful. My hope was hanging on by a thread at this point, and it meant everything for someone to give us that hope back, and do everything in his power to help us add to our family.

With this doctor, we had lots of in depth conversations, and he understood the translocation and how it was affecting our fertility (for more information on translocations, or to better understand what I’m talking about, see this site!) The frustrating part for us, was that there wasn’t a whole lot they could do. If a sperm carrying an unbalanced translocation got to the egg first, I would likely not get pregnant, or it would result in a miscarriage. Under the microscope, they look the same as genetically correct sperm, so even after washing the sperm before an IUI (a process where the take the sperm sample and take out all of the ones that look deformed or are too slow) there were an unknown number of sperm carrying an unbalanced translocation. In a nutshell, to speed up the process, we needed more eggs, and more opportunities for the sperm to get there. I was on clomid, my follicular phase was monitored via ultrasound and bloodwork, I was giving trigger shots to time ovulation as closely as possible, and then back for the IUI.

Finally. FINALLY. A BFP (Big, fat, positive)! Last August, right after my birthday I convinced my husband to do ONE more IUI and then we could take a little break and gather ourselves before moving to the next step, IVF. Everything about the last IUI was painful. 10x more than normal. I had to have the catheter inserted three separate times to ensure it was exactly where he wanted it. But it was worth it!

At this point, I hardly cared about the TWW (two week wait) as I had been though about 30 of those and it was just not exciting anymore and Jason kept asking me if I had gotten my period yet. I thought I was late, but was trying not to thing about it, everything just felt the same as it always did. Every day for about a week he asked me, and then he made me take a test. I was avoiding it, just dreading the thought of having to take it.

Even after the test was positive within 5 seconds, it was hard for me to be excited about it. It was scary, and honestly I didn’t want to lose it again. I went in for a blood test, and my levels were great, I was pregnant! I was “excited” but my mind was still not fully convinced. I saw my specialist throughout the first 12 weeks, and after 3 ultrasounds and other tests and monitoring, I was finally relieved and excited! Brooklyn Marie was born in May of this year, and that first tear was a BFG (big, fat goodbye) to all that pain. 10 weeks later, I will still cry my eyes out if I look her in the face for longer than 5 seconds! 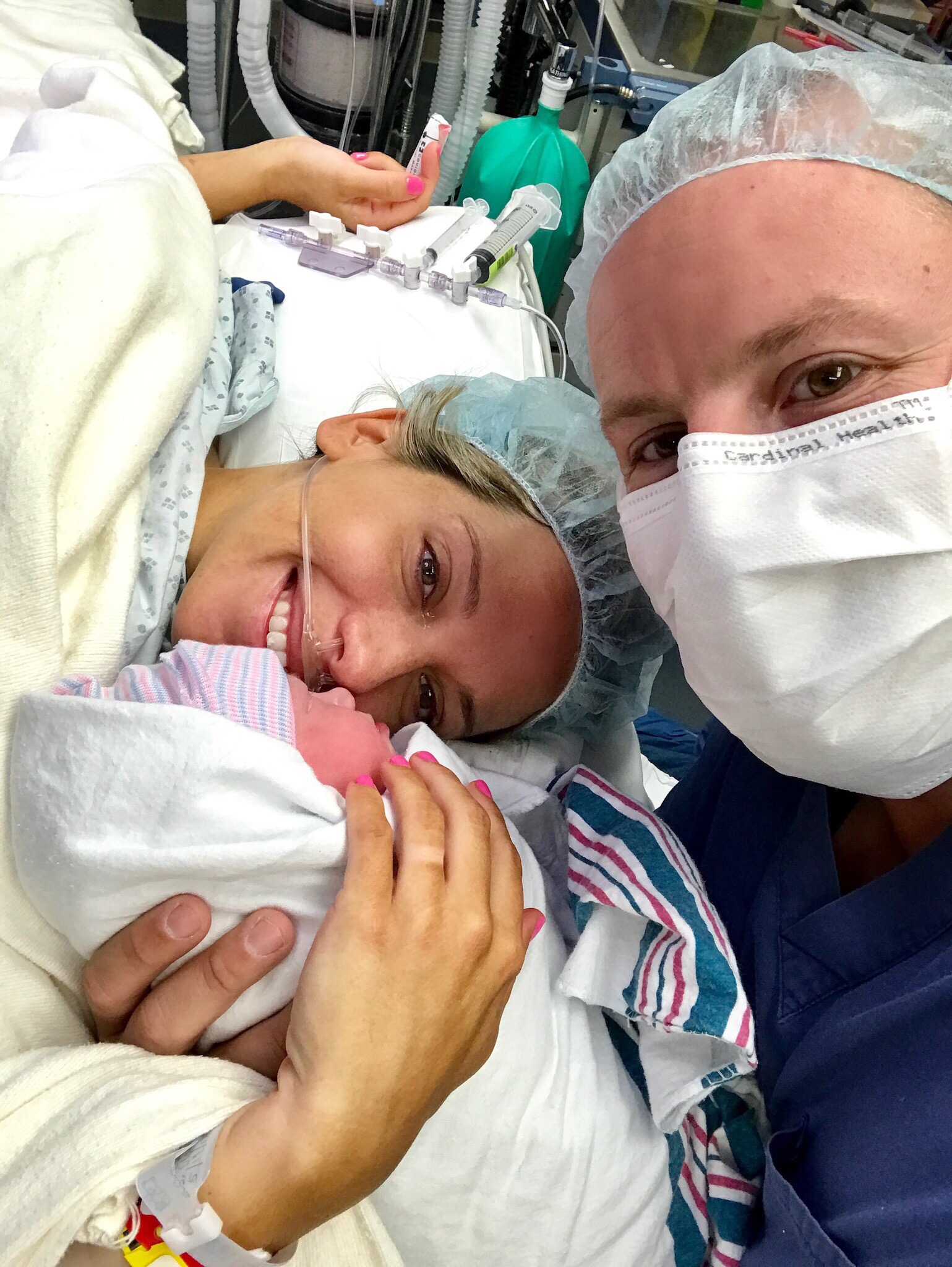 This video from American Greetings is truly the most accurate depiction I’ve seen of what it’s like to be going through infertility. Even though we were already blessed with one child, a child I’m more than thankful for every single day, the struggle to conceive a second was one of the hardest things we have been through. It’s very isolating, and your world starts to revolve around a 28 day cycle that’s impossible to ignore. So many times we were asked if we were ready for #2, and every time felt like a dagger to my heart. It’s such an innocent question, but it triggered so much emotion. I often times just said no, to avoid having to talk about it, and having to hear the same blanket statements over and over again. It will happen… You’re still so young… Stop trying so hard. All I ever wanted to hear was I can’t know what you’re feeling, but I’m here for you. YOU’RE NOT ALONE. 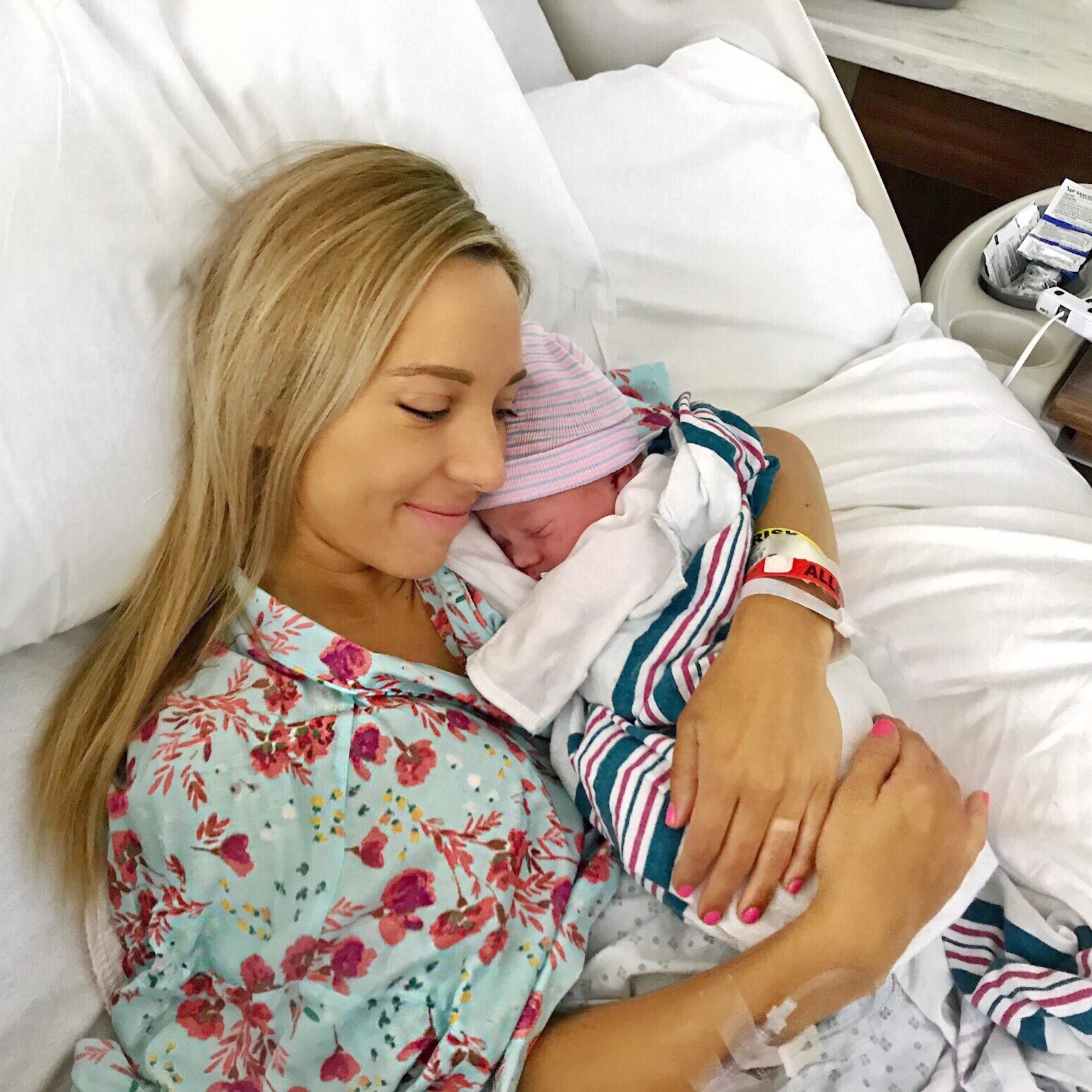 Thank you to each and every one of you that read this post. If I was able to give one person their hope back to continue along this hard journey, than it was worth it! You’re not alone. With 1 in 8 couples struggling with infertility, it’s a much more relatable topic than we think. If you know someone going through this hard time, a card from American Greetings is such a great way to connect with them and show that you care. For more details on their Give Meaning campaign, you can visit www.americangreetings.com/givemeaning.