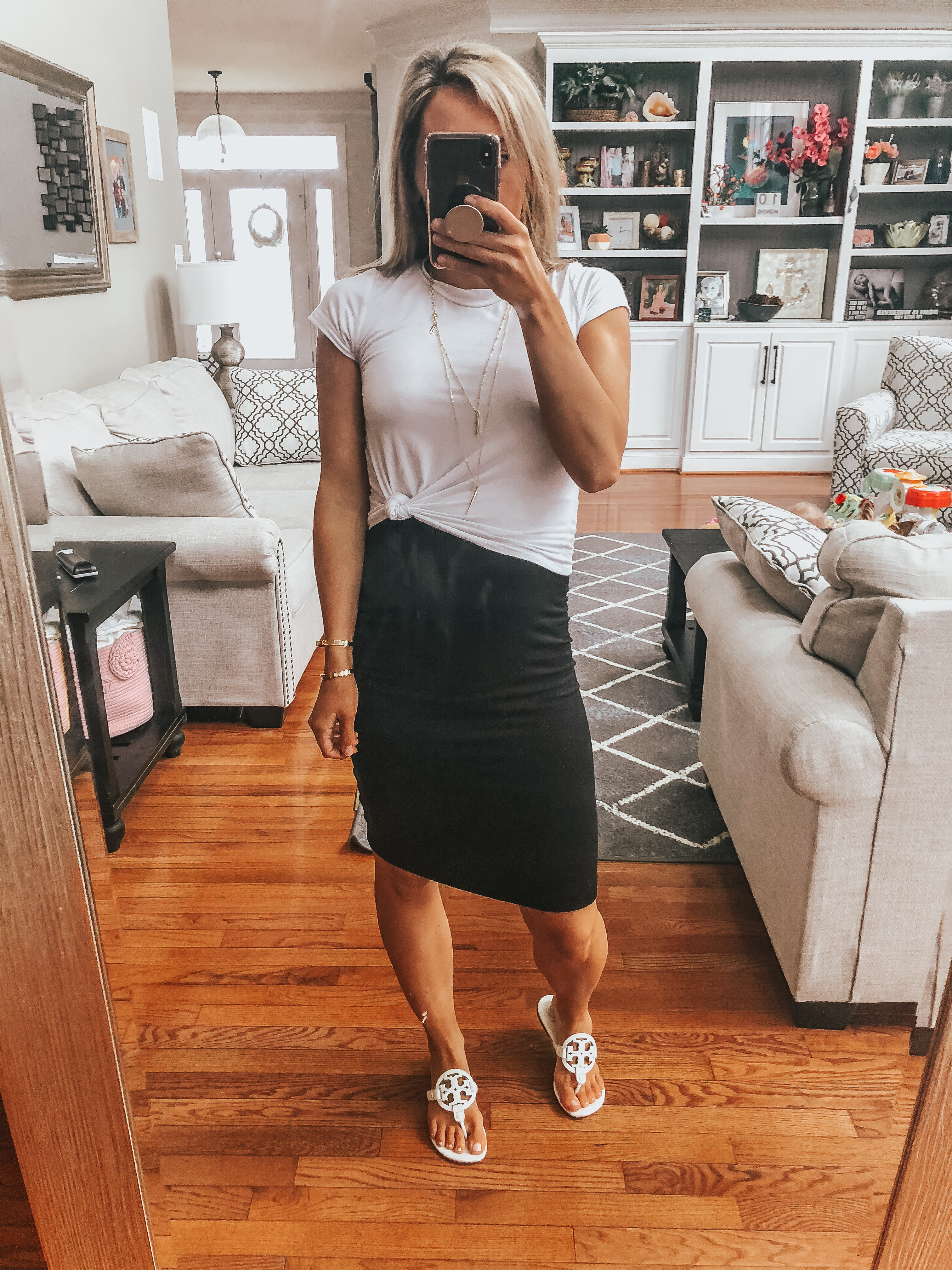 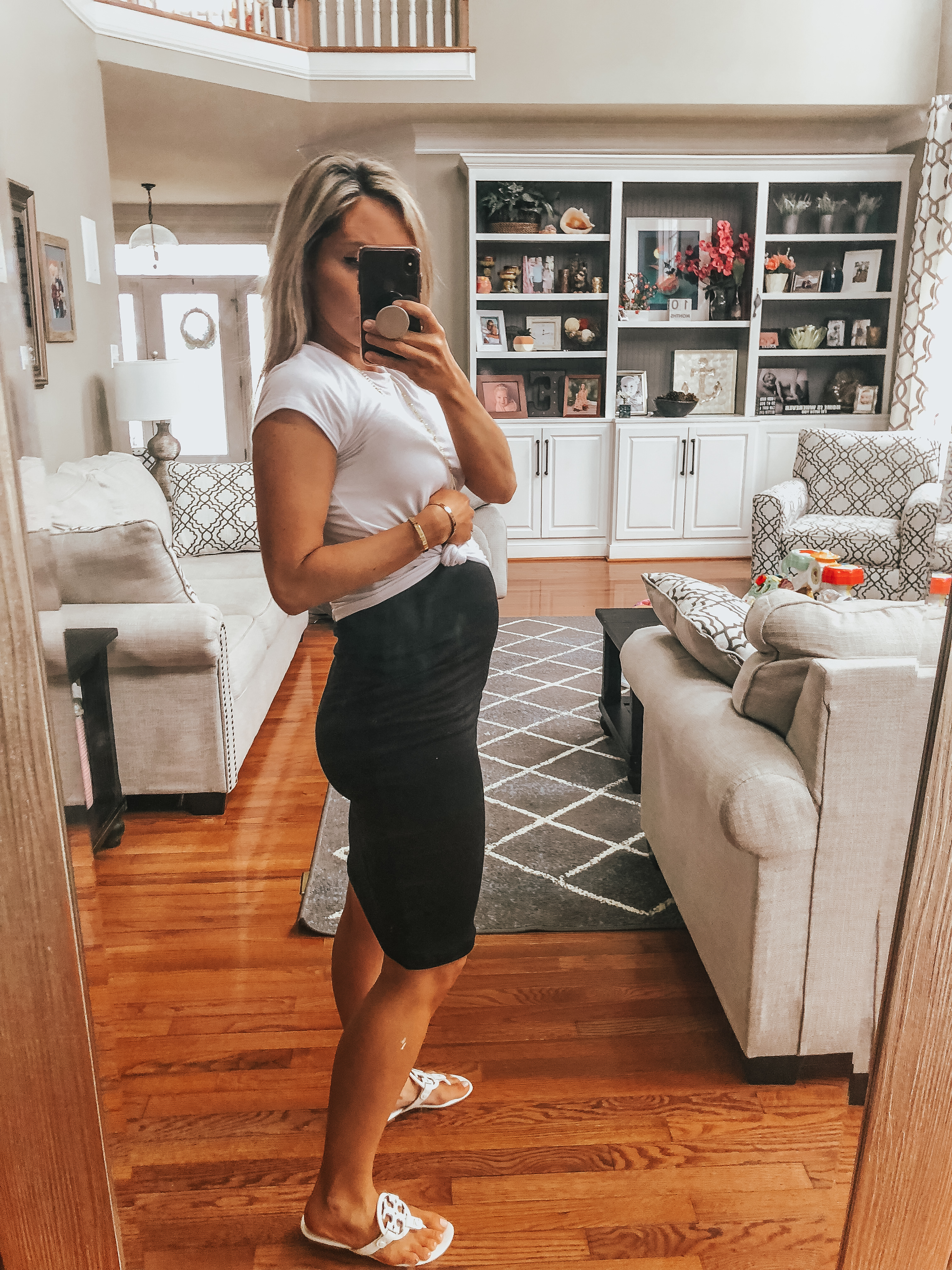 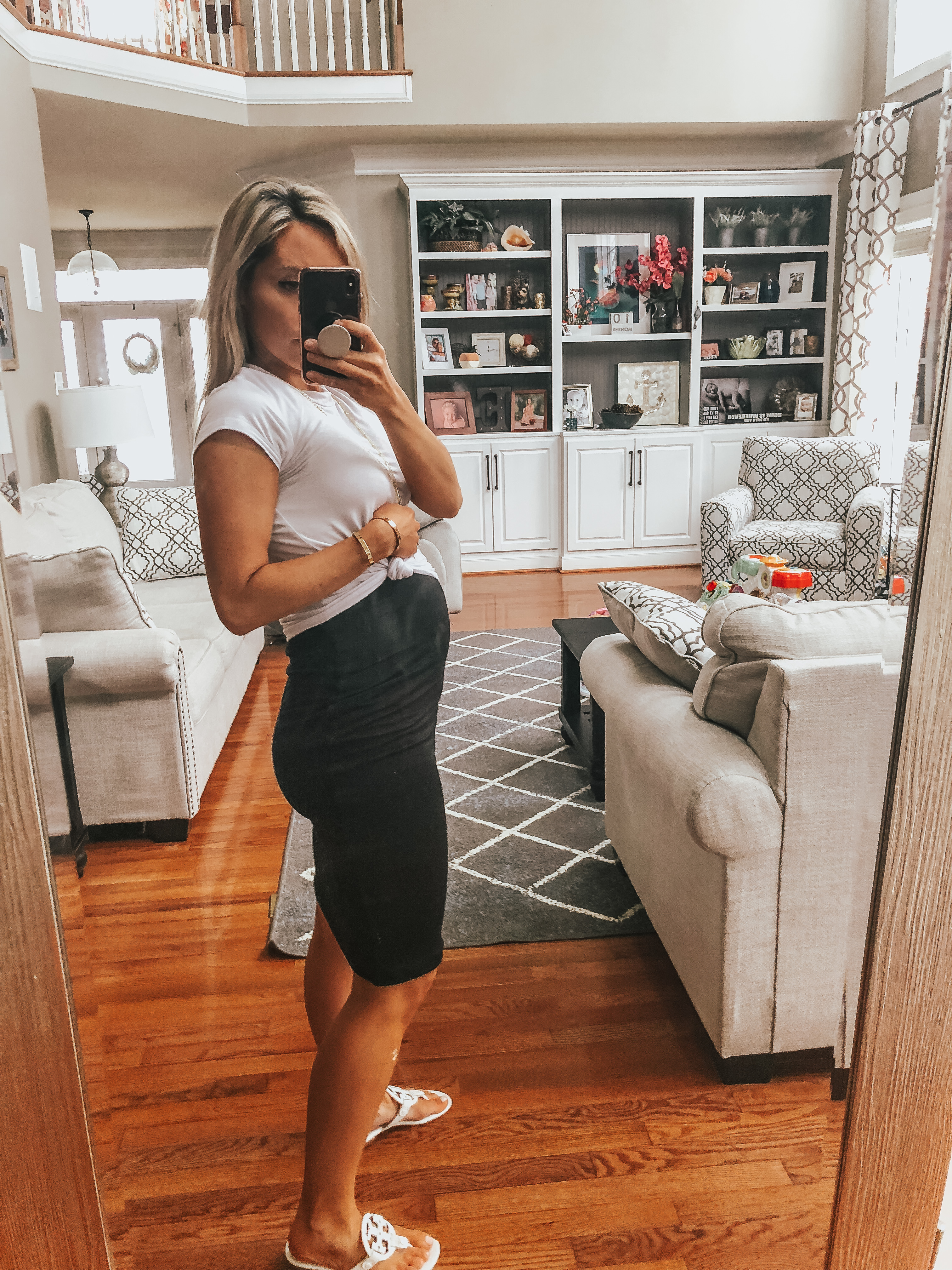 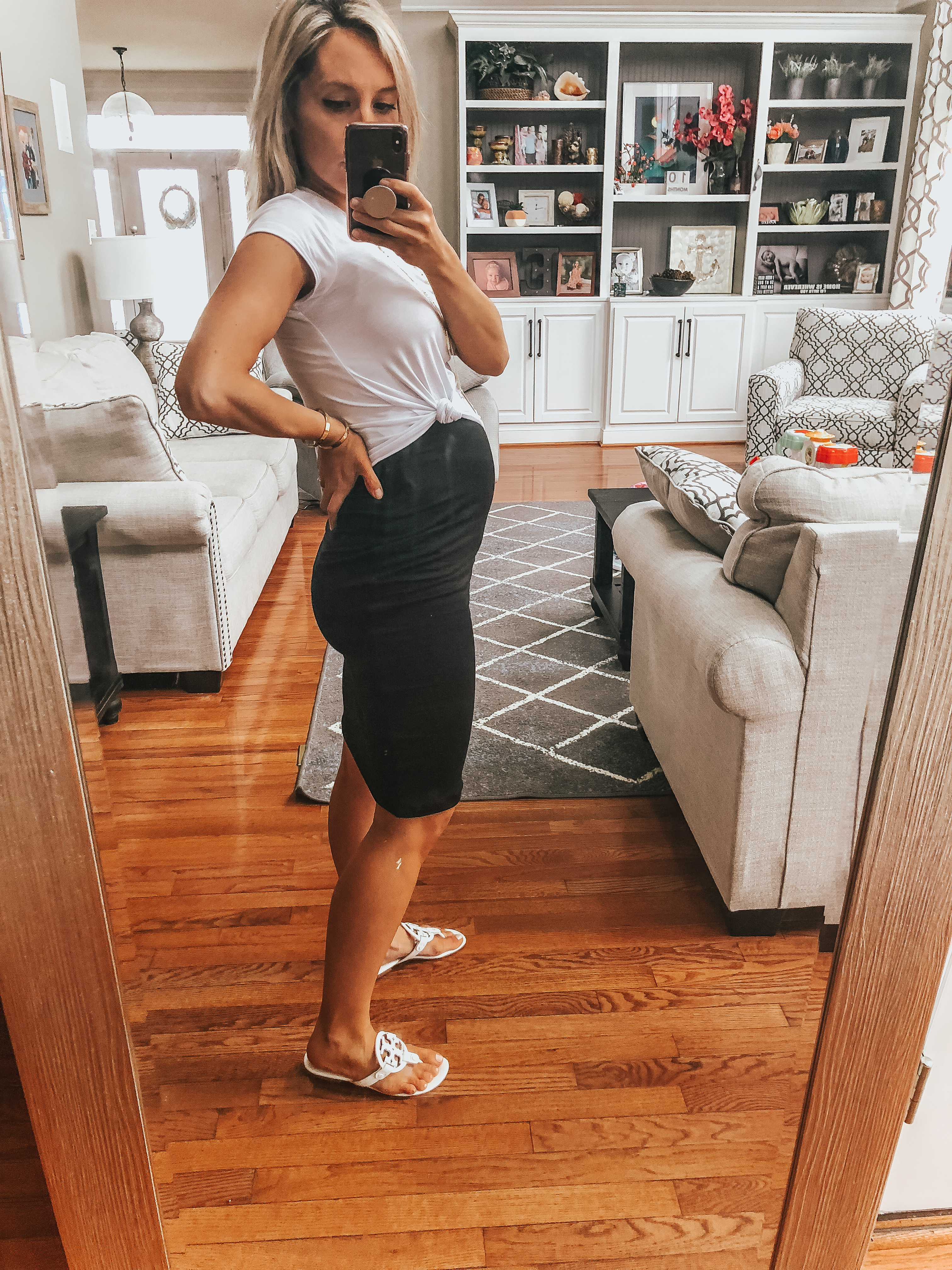 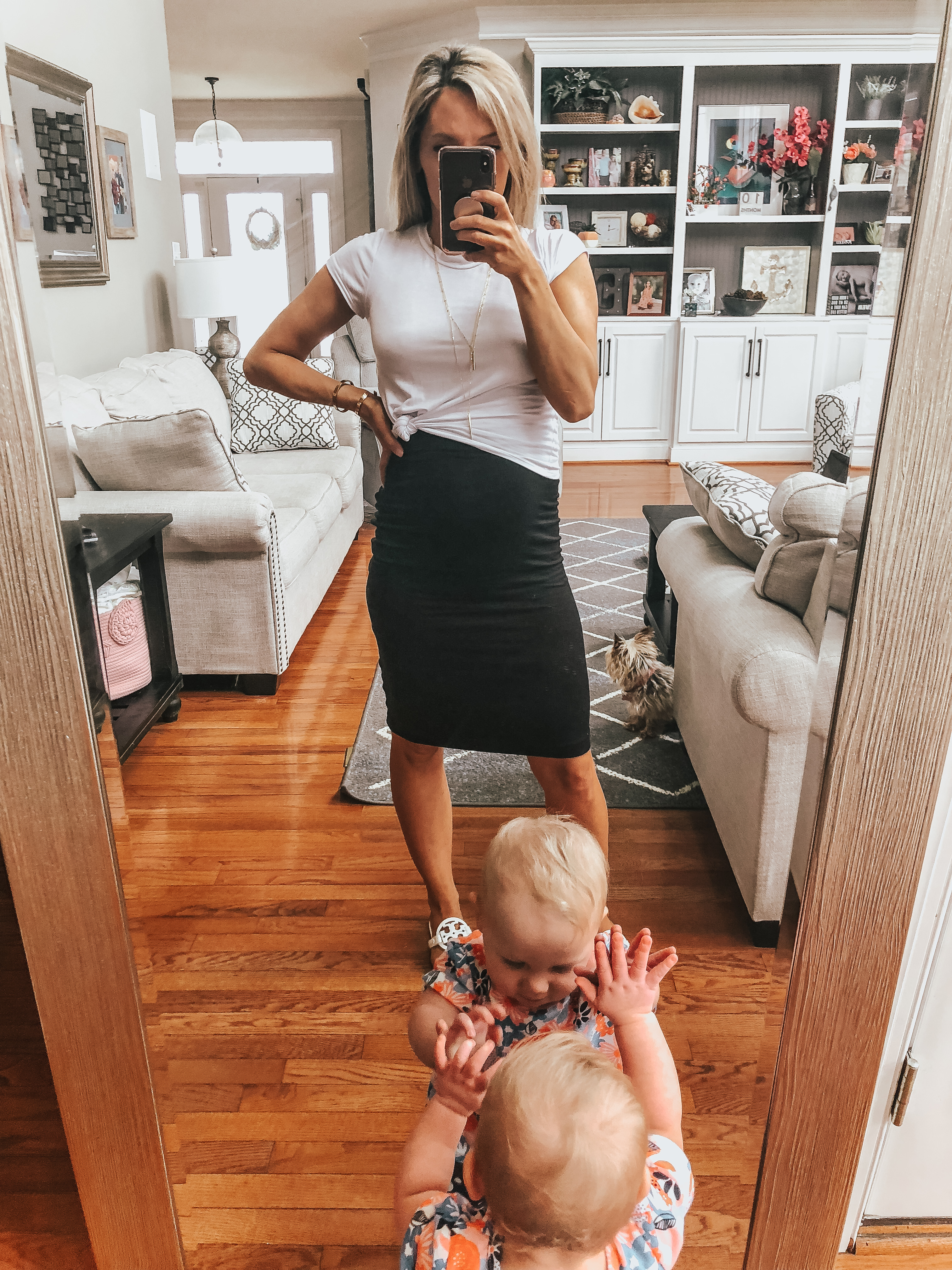 ***SIDE NOTE. I guess I should have cleaned this mirror before taking pics!! Ugh. But look who came back over to smudge them up even more so really whats the point! 🙂 My outfit was a gift from Sexy Mama Maternity.

Whoa, to say this pregnancy is going fast would be a major understatement. I’m sorry this is my first official bumpdate with Baby #3, but I will have more coming! I promise they won’t all be as long as this one ended up being, but there was a lot to catch up on!

I am going to the doctor this week and it feels like such a long time since I’ve been. I went 4 weeks ago for our big ultrasound, but my actual appointment was cancelled because my doctor was busy delivering a baby. All my tests and bloodwork came back great, so we just went ahead and scheduled for the next time. However, one funny thing was, little boy was SO wiggly during my ultrasound that even after almost 30 minutes the technician couldn’t get clear measurements of his feet, so I may have to have another ultrasound this week just to see if we can get his foot measurements!

This week I have to do the dreaded blood sugar test and I am not too excited about it! I really feel like for some reason I’m going to fail it this time… With Blaire I did fail and had to go back for the 3 hour round, where they draw your blood every hour for 3 hours, and you have to have a total of 3 of those sugary drinks. I ended up passing the long test fortunately! I did learn a little trick this time around tho, make sure you FAST before this test! I had no idea, but I fasted with Brooklyn before my drink/blood test and I passed with flying colors. However schedule your appt early because mine was later in the day, and then my doctor was SUPER late to the appointment and I ended up just feeling sick and dizzy for almost the entire day.

Is this pregnancy similar to the others?

This pregnancy has definitely been so different than my first two. I started showing much earlier, probably around 15 weeks to myself and most people, and by 18 weeks it was noticeable to others. With the first I was closet to 6 or 7 months pregnant before anyone could really tell! I was not sick at all with either of this girls, but this time around I was nauseous and was vomiting almost every day between weeks 5-8 with baby boy. Luckily I had some medicine to help control the nausea, and I know people that have had it WAY worse than me. Plus I really feel like it was a reminder to me that this pregnancy was real and that I needed to enjoy it, as I was honestly a bit shocked at first! Let me rewind a bit, as I’ve been asked a few times if this was a surprise or planned.

Was this a planned pregnancy?

Technically I hate this question because it’s such a personal question! And technically, a baby is a baby and it shouldn’t matter. BUT, to answer your question 🙂 YES & NO. lol. So most of you know that we struggled conceiving baby #2, you can see all about our journey here in this post. We had a huge move across the country, were adjusting to so many new things, and baby #2 took so much longer than we ever expected. We knew without a doubt that we were just going to let things happen, and if there was a baby #3 we would be thrilled, and if there wasn’t, we knew it was meant to be. I didn’t get on any birth control after Brooklyn. I haven’t been on birth control in years because I hate the way it makes me feel. Again, we were totally open to having a third baby, but we were being “careful” (you can take that term how you’d like) for the time being, until one weekend away. In my head I knew it was a possibility, but that will all the trouble we had before that the likeliness was not there. A few weeks later I thought my period was a couple of days late, which it never is. After looking back at a calendar and figuring out when my last cycle was, I realized I was much more than a few days late. I started googling “reasons my period could be late, other than pregnancy!” and not a whole lot came up. lol. And here we are, after I finally caved and took a test to confirm, and letting it sink in that this was really happening, I’m over the moon excited to be going through this now. Of course when I told Jason I was late, and I really thought he was going to freak out, he was so pumped! And luckily so since I did happen to be pregnant!

Are you excited to have a boy?

I never thought I would say this, but YES! I was dying for Blaire to have a sister and she is so in love with Brooklyn. All my life I wanted a sister, and envied all my friends that had sisters. However, with the third baby I did really want a boy. I am so excited and so curious to see what the little boy we created together will look like. Blaire looks exactly like me, Brooklyn looks exactly like Jason, I wonder if this will be our combo baby that compliments us both. I’m excited to learn about superheroes, and find cute boy outfits. Jason will have someone to golf with, and I will have a son that will be protective of me when I’m older. I will never forget the feeling of seeing Brooklyn for the first time (I was pretty out of it and drugged from surgery with Blaire) and bawling my eyes out at her beauty. I am looking forward to this day again so freaking much!

Anyways – wish me luck on this delicious drink/sugar test tomorrow. I’ll keep you updated on instastories. Thanks for coming by! 🙂 xo